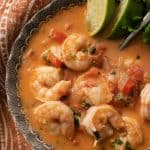 In this Brazilian shrimp stew, the shrimp are simmered to succulent perfection in a flavourful, savoury tomato and bell pepper-based broth. The addition of coconut milk and freshly squeezed lime juice then take this dish over the top. This delicious dish is not to be missed if you are a lover of seafood like I am.

This dish is interesting because Brazilian moqueca (stew) is an authentic national dish that shows off the various cultures that come together to form the Brazilian people; with Portuguese, African, and indigenous influences. This variety with coconut milk is very popular in the eastern Bahia province.

It has also become very popular in my own home. The hint of heat from the cayenne, the freshness of the lime juice and cilantro, the creamy coconut milk, and the tender shrimp all combine so beautifully together. Let's just say that it certainly didn't last long.

See the recipe card below for quantities.

Prepare by dicing the onion and red bell pepper; and mincing the clove of garlic.

Cook the onions in a medium-sized saucepan with olive oil until they soften and begin to become translucent.

Stir in the red bell pepper and garlic, continuing to cook for a few minutes until the pepper has softened.

Add in the shrimp, the can of diced tomatoes (including the juices), cilantro, cayenne pepper, and paprika. Simmer the shrimp stew gently until the shrimp turns opaque. Keep a very close eye on them. You don't want them to be undercooked; but it's very easy to over cook them as well.

As soon as the shrimp have turned opaque, stir in the coconut milk and continue to cook just until the broth is heated.

Remove the pan from the heat. Mix in the freshly squeezed lime juice and season to taste with a bit of salt and pepper.

Distribute the Brazilian shrimp stew into serving bowls. Garnish them with lime wedges and sprigs of fresh cilantro.

For dicing anything (especially onions!) I love to use my Alligator chopper. My eyes are really sensitive to onions and the chopper makes dicing so quick and easy anytime I don't feel like crying off my mascara.

You can easily substitute the canned tomatoes with two cups (400 g) fresh tomatoes. Because we include the juices from the can in this recipe, make sure to retain any juices that seep out of the tomatoes when chopping and include them.

Moqueca is a dish that is popular all over Brazil, however, this version that uses coconut milk is specific to the Bahia province. In lieu of coconut milk, in other regions often use yuca plant (a starchy root plant found in South America and Africa) purée to add richness and thickening to the broth with its starches.

Depending on where you live, yuca may be difficult to acquire so I recommend trying the Bahia version with coconut milk, or just omit the coconut milk if you prefer.

Moqueca is also often made with locally caught white fish rather than shrimp as the protein. If you decide to make this dish with fish, I recommend using a firm white fish such as halibut.

Store leftover in an airtight container in the refrigerator for up to three to four days. I recommend reheating on the stove top, being careful not to bring the stew to a boil. You don't want to overcook the shrimp.

My favourite side to go with Brazilian shrimp stew is my easy Thai coconut rice. The flavours are so perfect together! Regular rice will make a great side as well. Or, enjoy it on its own for a delicious, low-carb meal.

Heat oil in a medium saucepan.

Sauté onions until they soften and  begin to become translucent.

Mix in red bell pepper and garlic. Continue cooking for a few minutes until pepper softens.

Add in shrimp, tomatoes (with juice from can), cilantro, cayenne pepper, and paprika. Cook at a gentle simmer just until the shrimp turns opaque - be careful to not overcook.

As soon a shrimp turn opaque, stir in the coconut milk. Continue cooking just until broth is reheated.

Remove the pan from the heat. Stir in the lime juice and season to taste with a bit of salt and pepper.

Divide into serving bowls and garnish with lime wedges and fresh cilantro.

My favourite side for this dish is easy Thai coconut rice. Regular white rice makes a great side as well.