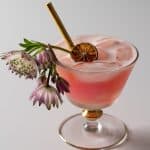 The Chinese Fizz is just straight up a really cool cocktail. This rum-based cocktail is understated, elegant, and beautifully balanced. Expect a nice finish with a subtle cherry flavour. This cocktail has earned itself a spot on my go-to drink list. I think you're going to love it as well.

The Chinese Fizz was created by Phil Ward in 2008 at the Death & Co Bar, New York City, and featured in the Death & Co book. It was his 'fizz' take on the Chinese cocktail from The Savoy Cocktail Book by Harry Craddock of the Savoy Hotel London, England (1930).

Fizz cocktails are mixed with either a whole egg or egg whites to give them a distinctive, frothy foam and silky texture, and they are served in a fizz glass.

See the recipe card below for quantities.

Add all of the cocktail ingredients into a cocktail shaker and dry shake (shake without ice) for thirty seconds. Add some ice cubes and shake for another twenty seconds. Strain well into an ice cube filled fizz glass. Garnish with a dehydrated citrus wheel and a straw to serve.

How to make dehydrated citrus wheels

This recipe originally calls for an orange wheel, but for these tiny cocktail garnishes I used some little key limes. You can use whatever citrus you prefer. Slice them very thinly. I used a Japanese mandoline to make doing this easy and the slices perfectly even. Place them on a parchment paper covered baking sheet.

With your oven set to its lowest heat setting, heat the tray for about five to eight hours. Check on them occasionally. They will be completely dry when finished. I flipped mine over near the end to help speed up the process.

You could use another kind of rum in this cocktail, but I recommend that you stick to brown rather than white so that it can stand up to the other strong flavours. If the rum you choose is on the sweeter side, reduce the amount of simple syrup a touch.

Simple syrup can be substituted with agave syrup, however, it is not an equal substitution. I would convert ½ oz simple syrup to ¼ oz agave syrup or less.

Everyone who enjoys making cocktails should have a great cocktail bar set. I really like this one. It comes with so many great tools, including a muddler and various types of strainers. I purchased one for myself then ended up giving away a few as gifts.

This cocktail served in a fizz glass, which is kind of a deeper more squared version of a coupe glass that has some room for ice cubes.

Looking for more great cocktails? I have a bunch I think you will like! For example, the Gypsy Eyes cocktail pictured below, with its bright citrus flavours and underlying complex herbaceous notes. Look for it in my drink recipes, along with many more.

The Chinese fizz is a rum-based cocktail that is understated, elegant, and beautifully balanced. Expect a nice finish with a subtle cherry flavour.

Add all of the cocktail ingredients into a cocktail shaker and dry shake (shake without ice) for 30 seconds.

Add some ice cubes and shake for another 20 seconds.

* Crafting cocktails with raw egg requires careful handling of the shell where bacteria lies. I like to buy a carton of pasteurized egg whites to make things easier.

This cocktail recipe is by Phil Ward, Death & Co, and is featured in the Death & Co book.