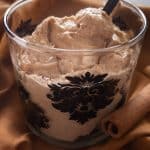 I love whipped, flavoured butters. They really add something special. And this cinnamon sugar butter is no exception. It has the perfect touch of spice and sweetness. And it's so fluffy and just begging to be slathered on toast, breakfast treats, and freshly baked breads or muffins.

This butter couldn't be easier to make, with just three ingredients. You will need some softened, salted butter, some brown sugar, and some ground cinnamon.

I made this butter using a stand mixer because it does require quite a bit of whipping. But you could make it using a hand mixer, or even mixing by hand if you are feeling up to a bit of elbow exercise. The key is that the butter has to be whipped until it becomes noticeably lighter in colour and fluffy.

Simply add all of the ingredients into the bowl of your stand mixer. Using a paddle attachment, start mixing slowly for a moment just so the powders have a chance to incorporate without exploding all over your countertop.

Turn the speed up to medium-high and whip for at least four minutes, until the butter has lightened and become soft and fluffy. Scrape down the bowl with a rubber spatula as needed. That's it! Your butter is ready to enjoy.

Store any cinnamon sugar butter that you don't use right away, covered in the refrigerator. But if you serve this alongside my Pumpkin French Toast it certainly won't last long.

In this dreamy breakfast, the fluffy butter softly melts into the thick, warm spiced pumpkin toast. You would think they were made for each other (probably because they were, lol). I very much recommend you try this delicious combo.

What did you end up using this cinnamon sugar butter on? I would love to know! Let me know in the comments; or use the hashtag #corianderandlace on instagram so I can see your creations 🙂

A light and fluffy whipped butter flavoured with cinnamon and brown sugar. This delicious spread is awesome on breakfast food, breads, and muffins!

Add softened butter, brown sugar, and cinnamon into the bowl of a stand mixer.

Using a paddle attachment, beat the butter on medium-high speed for at least four minutes until it is light and fluffy. Scrape down the bowl with a rubber spatula as necessary.

Store any cinnamon sugar butter that you don't use right away, covered in the the refrigerator.